High spirits at Cykelvasan despite the rain

Vasaloppet is a classic cross-country ski race over a 90 km stretch from Sälen to Mora. Since 2009, those who prefer cycling to skiing can participate on two wheels along the same course. 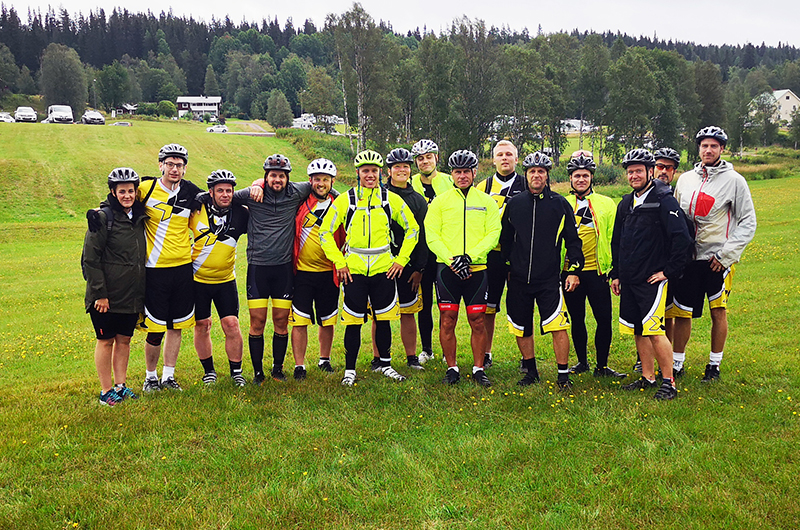 The route for the mountain bikers is almost identical to that for the skiers. All the checkpoints are the same. So if you’ve always fancied stopping for a cup of hot blueberry soup but not been up to the challenge on skis, you have the chance on a mountain bike instead.

Just like the Vasaloppet ski event, there are several variations of the bike event. All the participants from Axelent entered the Cykelvasan 90 race, which covers the full 94 km stretch, and the elite class. Axelent had no less than 26 participants from three countries.

It is impossible to write about this year’s race, the eleventh to date, without mentioning the weather. The photo on the cover says it all. Most of those taking part in the event had to cope with pouring rain which transformed the already challenging track into a muddy morass. The fastest bikers who’d qualified for the early start groups were luckier, many of them completing the course before the rain began. Some of Axelent’s participants were in these groups having taken part in qualifying races earlier in the year. But the great majority had to battle it out through the rain and mud for the entire race.

Emma Johnsson was one of the participants representing Axelent on her bike. Emma is not a novice in the saddle, having competed in another one of Sweden’s major bike races, the Halvvättern. This 150 km course follows the shores of Lake Vättern. Whereas the Cykelvasan is mountain biking in tough terrain, the Halvvättern is on tarmac only and the competitors have road bikes. And so, as Emma now knows, they are two very different styles of race.

“It wasn’t at all what I was expecting. Apart from the fact that you’re on a bike, there are almost no similarities between the two. You can usually settle into a good rhythm when you’re road racing. In the Cykelvasan race, we were riding in very demanding terrain and you couldn’t relax for even a second. I am much more used to cycling on tarmac roads and I’d bought myself a hybrid bike for the occasion. It became apparent quite quickly that this was not an optimal choice. You need a proper mountain bike for that sort of terrain,” Emma says.

So what enticed a seasoned road cyclist to enter a tough MTB race?
“There’s something special about the Vasaloppet. I know I’d never be able to do the race on skis, so I jumped at the chance to bike the 90 km course instead,” Emma Johnsson tells us.

How did it go for Emma in the rain? Despite her choice of bicycle and the awful weather, she made it across the finishing line. But it’s the social element of the event that creates the most lasting memories.
“What I most appreciate is being able to do this with everyone else. There was a large group of us from Axelent and the camaraderie was fantastic. There were happy faces during the race too. I talked to lots of people along the way and the atmosphere was really friendly. It was great to see all the people cheering us as we crossed the finishing line in Mora, despite the weather being bad and it was late in the day. That gave me the final boost of energy I needed to end on a strong note. I’m not sure if I’d do it again, to be honest. It was a fun experience but I think I prefer biking on roads,” Emma Johnsson says with a laugh.